Kwanzaa is an African American and Pan-African holiday which celebrates 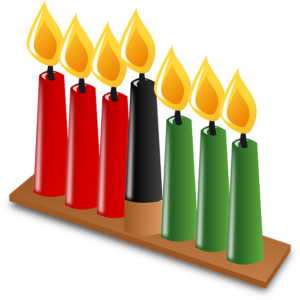 family, community and culture. Celebrated from December 26 thru January 1, its origins are in the first harvest celebrations of Africa from which it takes its name. The name Kwanzaa is derived from the phrase “matunda ya kwanza” which means “first fruits” in Swahili, a Pan-African language which is the most widely spoken African language.

Like Freedom Schools, St James’ Episcopal Church Austin, and Welcome Table, Inc., Kwanzaa is a story of self-determination. Kwanzaa started during a time when people in the US weren’t allowed to celebrate the traditions or languages or faith of the African diaspora, nor encouraged to learn about our rich and diverse heritage.

Today we uplift the Nguzo Saba, seven principles that represent a guide for daily living studied during Kwanzaa to be practiced throughout the year.

Habari gani? (Swahili for what’s the news) is the official greeting spoken during the 7 days of Kwanzaa. The response is the principle of the day. 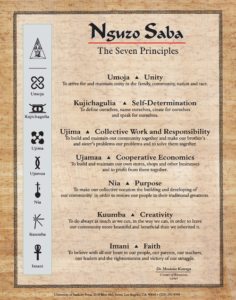 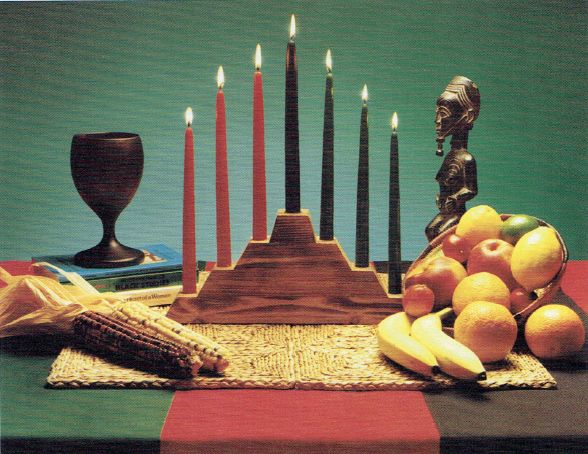 Mazao (The Crops): These are symbolic of African harvest celebrations and of the rewards of productive and collective labor.

Mkeka (The Mat): This is symbolic of our tradition and history and therefore, the foundation on which we build.

Kinara (The Candle Holder): This is symbolic of our roots, our parent people — continental Africans.

Muhindi (The Corn): This is symbolic of our children and our future which they embody.

Mishumaa Saba (The Seven Candles): These are symbolic of the Nguzo Saba, the Seven Principles, the matrix and minimum set of values which African people are urged to live by in order to rescue and reconstruct their lives in their own image and according to their own needs.

Kikombe cha Umoja (The Unity Cup): This is symbolic of the foundational principle and practice of unity which makes all else possible.

Zawadi (The Gifts): These are symbolic of the labor and love of parents and the commitments made and kept by the children.

Bendera (The Flag): The colors of the flag are black for the people, red for their struggle, and green for the future and hope that comes from their struggle. It is based on the colors given by the Hon. Marcus Garvey as national colors for African people throughout the world.